Still no sailing.  Not my fault.  Sometimes all those pesky family obligations get in the way.  Like a 60th birthday party for an Aunt, then a sick wife the next day.

Wife works the next weekend so barring some kind of thunderstorm or illness or other unforeseen event, I plan on sailing Saturday.

Here's more beach pictures and a short video I took.  Same beach as last weekend.  Only this time we were there on a Sunday.  Busier than I expected.  I'll return to sailing stuff real soon. 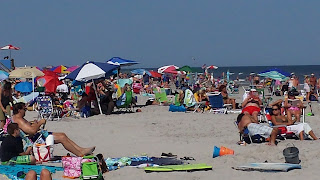 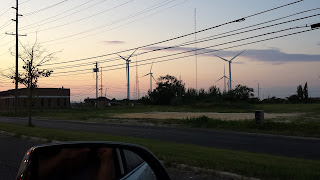 I wanted to sail.  My extended family had other plans like going to the beach.  Still at/on/in the water so it wasn't a complete loss.  So enjoy some random photos from my day at the beach. 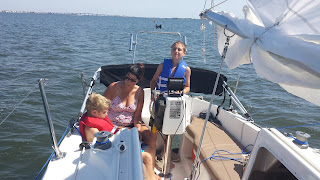 Just a great day of being on the water.  This outing I took my nephews and their parents out for a day on the water.  Steve has been out with me before, he was the one doing all the yelling in Reefing Screaming and Hitting Bottom.  Needless to say with a couple of young kids and his wife, I planned on nothing but a smooth, uneventful day.

The wind was projected to be about 10 - 12 mph with an occasional gust to 15.  I decided to keep a reef tucked in just in case.  I've been out enough times to know that whatever the weather guys may say, I might experience very different conditions.  Not having any kind of wind gauge on the boat, I would have said that we had more of a 15 mph wind with an occasional gust of 18-20.  The reef was the smart idea as I didn't want any screaming this trip. 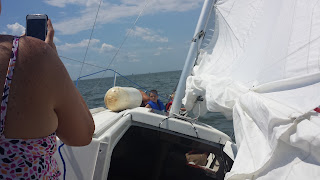 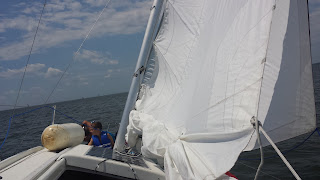 We headed out toward Great Bay with the wind nearly on our nose.  No rush when sailing so I just kept tacking through it and keeping smiles on faces.  I had my sister in law work the jib sheets and let my nephews steer the boat a few times.  What a great way to spend four hours.

Just after noon the kids got anxious to go swimming so I anchored the boat in a shallow spot.  This was the first time I had trouble anchoring.  I have a Danforth anchor that came with the boat.  I suspect it's too small.  (I don't have the size available as I type this so will try to measure it in two weeks when I next see the boat).  Between the wind and the anchor size we were dragging.  I had roughly 100' of line out and we were still dragging through the hard mud.  We were completely out in the open, no one was around so I just kept watch around the area while eating lunch and let us drag, hoping that the anchor would catch at some point. 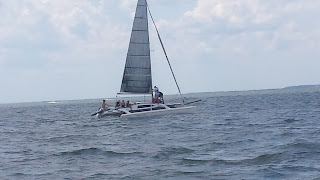 We averaged 1 knot dragging on the gps.  Sometimes we would catch and hold a bit and then the boat would swing and we would start dragging again.  About 20 minutes later, just as I finished my lunch, I was thinking about resetting the anchor and trying again when we stopped and held at 0.0 knots.  We swung a bit and seemed to be holding.

I climbed out and felt the bottom about five feet down.  We were in charted 1' water and it was high tide.  We do not have a 4' tidal range here.  Ever since Sandy everything has been a bit off.  There is one area in particular where it's charted as 1' and at high tide  it's only 2' deep.  Scary stuff. 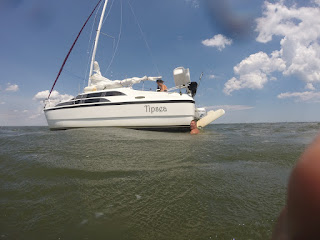 Everybody jumps out and we have a ball playing and splashing.  The boat must swing a good 60' on the anchor.  The kids keep their life jackets on but us adults are playing hard and getting tired fast.  I get us all life jackets to float around on and throw out a 50' line that I tie off to a stanchion.  We must play out in the water for a solid three hours. 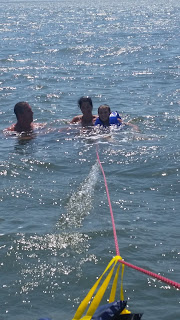 It's time to get back to meet my wife at the campground for dinner.  The cruise back is uneventful and fun.  I let Dawn motor the boat most of the way back.  I swear at one point she had us turned almost completely around.

I had an issue though when I tried to get us turned around in the canal.  It was still quite windy within the canal.  I usually have to turn the boat 180 degrees and head to my dock.  This time however the wind was coming straight down the canal.  When I turned the boat broadside, the wind caught it and I didn't have enough room to complete my turn.  At this point we are being shoved sideways along the canal.  I had one rudder down trailing as it was low tide.  I can't put my rudders straight down at low tide.  I had forgotten to drop my centerboard down 6-8 inches.  Not sure how much affect that really has.  With one rudder down I had great coasting and steering ability at idle, but my reverse sucked.  I'm going to write up a more detailed explanation with diagrams later.

Steve has a GoPro and recorded a bit of video.  Nothing special about it, just folks having fun.  Not edited but there's a funny section in the last 15 seconds or so.