A Dip in the Bay

Congratulations!  You are reading my first sailing post where... 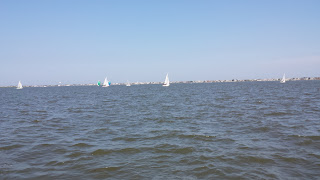 I took my daughter and her boyfriend (6 years, possible future fiance?) out for a ride.  Yeah, more ride than sail today.  I've been heading Southerly into Little Egg Harbor every time I've come out of the creek.  It's easy to follow along a channel and get out to some "not too distant" deeper water.  I had decided to go Northerly this time to check out the scene in that direction.

I noticed two things almost immediately.  There is a considerable amount of boat traffic heading north and it took about an hour of motoring through a channel to get to deep water.  My Mac 26M was cruising at about 7.5 knots at 4000 rpm with all my water ballast in.  I really don't know if that's any good or not for a Honda 50 and I'd be curious what other's experiences are. 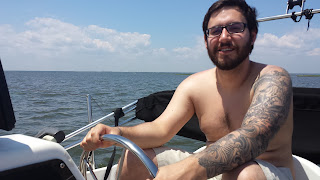 Anyway, we got passed a lot.  I spent quite a bit of time just looking over my shoulder.  To be honest, almost every boater out there gave us a wide berth (in as much as the channel allowed for) and everyone was happy, smiling, and mostly waved.  I only had one guy I thought was kind of a moron.

Another boat was heading toward us.  We're all in a fairly tight channel and I'm hugging the far right of it as much as I can.  Some jerk decided he wasn't going to slow down or wait while the other boat came toward us.  Instead he cut in between me and the oncoming boat with all of us in a section maybe 80-100 feet across.  It wasn't too close of a call but it just felt uncomfortably close.  Just figured it was kinda rude.  Some people are just in too much of a rush.


I motored up roughly 9 nm.  It was going to be a short day due to my wife wanting us all back by 5ish or so.  Considering I hadn't gotten back till 8pm the week before, I figured it would be in my best self-interest to adhere to her desires this week.  After just over an hour of motoring I killed the engine just South of Barnegat Bay near Conklin Island.  Raised the sails and started working our way back home.

There's nothing exciting to report other than the damned Greenhead Flies that were out in considerable numbers.  It was a beautiful day with about 5 knot winds just off my stern quarter.  Perfectly smooth ride.  We continued this way for several hours until we got too hot. 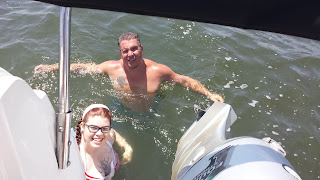 I decided to try something new and navigated to a charted 3' area.  Tossed out the anchor and jumped overboard.  Water had to be mid 70's and the water was about 4' high.  We lounged around for an hour or two just enjoying the scenery, a couple of cold beers, and a sailboat race about 300 yards away that I didn't get a photo of. 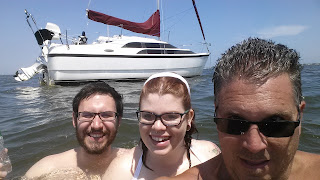 We had a great time and again the versatility of these great little boats continues to impress me.

You may notice the lack of name on my boat.  I have to thoroughly scrub it and get the salt water off.  Not willing to haul the boat out so I'll have to get creative later on.  The name is onboard though and I'll be getting some good rum for the naming ceremony later this summer.  Someone Suggested "Sailor Jerry" awhile back.  I regularly drink Captain Morgan and/or Kraken so figured I'd give it a try.  Besides, it sounds like a good boating rum! 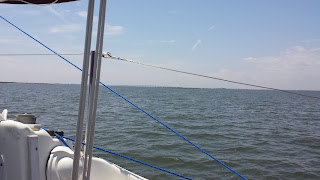 After our dip we sailed back with just the head sail to just before the route 72 bridge.  I furled the sail and we finished the last mile or so on motor.  Navigated through the creek and had my smoothest u-turn and docking in the canal so far this year.


Motored 14, Sailed 8 for 22 today.
Total distance is 97 nm for the year.
Lesson Learned:  Not every venture out needs to involve screaming or heeling over to 30 degrees.