An Introduction and the Start of the Dream

A long, long time ago.  In a state far, far away.  A little boy received a book titled The Boy Who Sailed Around The World Alone.  There were stories of exotic locations, triumphs, and failures.  The photos were riveting and a dream was born.  As tends to happen sometimes, dreams get pushed back.  We go to work, get married, have kids, and just get busy lives.  The dream gets pushed further and further until it all just about gets forgotten about.

Until one day, after a life full of adventure, great memories, and family something changes.  It was over eight years ago, Sunday, July 27th, 2008.  I remember going out fishing with my father-in-law and just staring out at the ocean.  I was doing a photo challenge at the time and captured a photo of a pretty little sailboat.  A tiny spark was ignited and started to smolder.

A few more years go by and not much else happens.  I start talking about sail boats though.  Looking at photos, watching them sail by whenever I could, started reading forums and articles.  Then around August 2014, I purchased a 1980 AMF Paceship PY23. 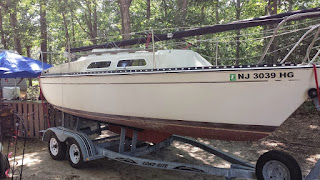 I launched and motored it to a friends house.  The motor died and the boat started sinking.  Numerous other problems were discovered and I decided I had purchased a "project" boat instead of a "sail" boat.  I sold it April 2015.

On the 29th of April, 2015, I purchased and brought home my "new to me" 2005 MacGregor 26M.  I now had boat payments but most definitely had a working sailboat.  This blog will be about the boat, my experiences, and the memories. 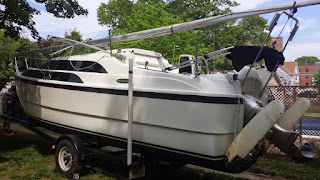