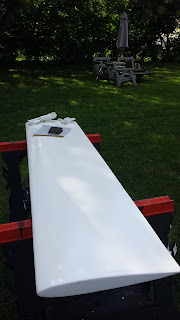 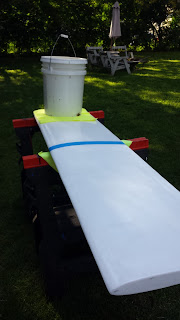 I received the new daggerboard Friday but didn't get a chance to begin work until Monday night.  With the boat staying in the water, I needed to put some anti-fouling paint on it to prevent marine growth.  The board is 69.5" long.  I figured getting the bottom 3' covered in paint would be a good start.  I routinely leave anywhere from 6" - 12" of board protruding when I navigate the canals.  That plus the 18" draft still leaves me an additional 6" of paint should I do something silly like not raise the board high enough.


Taped off at the 3 foot mark, I used a half full 5 gallon bucket of paint to weigh down one end while I worked on the other. I sanded with 220 grit sandpaper to rough it up so that the paint would adhere better.  Next time I would go a bit courser next time, maybe 180 grit. 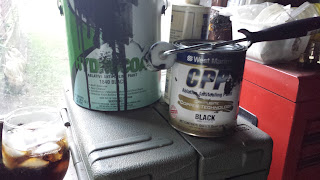 A 1/3rd of a quart was enough to put two coats on.  I would have liked to do another coat but it was already getting late by the time I got the second coat on.  The board had to be ready for transport Tuesday and installation on Wednesday.  The hydrocoat was previously for the rest of the boat.  I'll get to see which lasts longer and works better.

The completed project along with a Captain & Coke reward. 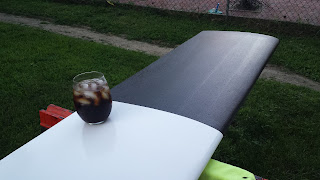